AKO BICOL Partylist extended their warmest congratulations to Father Bonifacio “Ted” Lopez who will be installed as the First Bicolano Gregorian Priest and Third Filipino to become Parish Priest at the Sister Elizabeth Parish and Zachary, Vatican City, Rome on October 29, 2017 at exactly 10:30 in the morning. 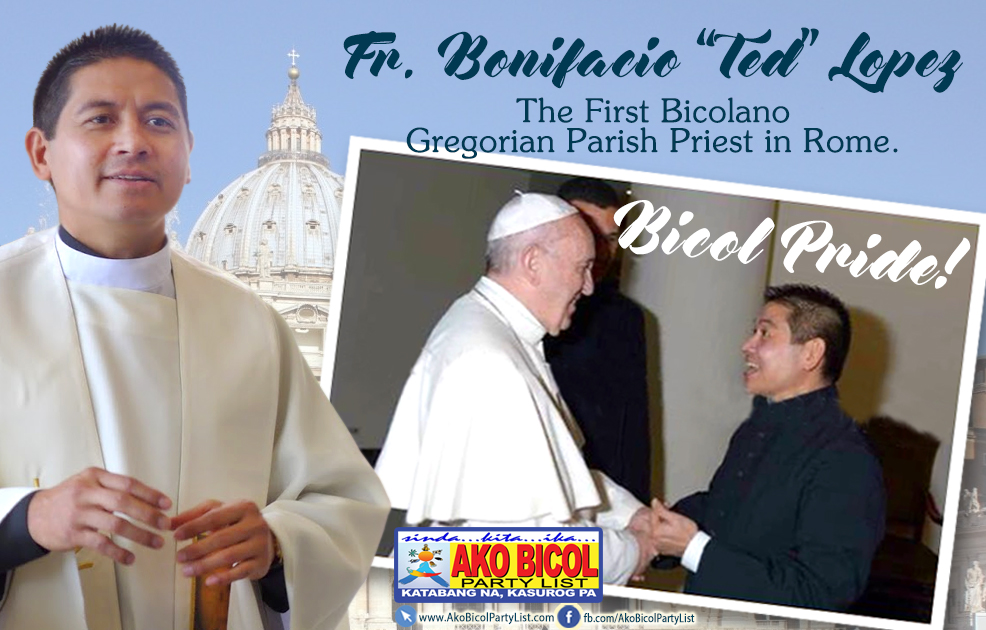 “Knowing that another Filipino will be installed as a parish priest in Rome is already in itself great news and to also learn that he came from Bicol is something that we are extremely proud of,” AKB Representative Rodel Batocabe said commending Father Ted Lopez in his new milestone of serving the Catholic Church.

Lopez was born and raised in Ligao City, Albay. After completing his high school studies at St. Gregory the Great Seminary, he went to Rome to finish a college degree and fulfill his childhood dream of becoming a priest according to his seminarian classmates.

On December 1994, he was officially ordained to priesthood. Lopez has been living in Italy for 30 years and serving the Roman Catholic Church for 22 years. He recently served the Parrocchia Nostra Signora di Lourdes (Our Lady of Lourdes), Diocese of Rome.

On January 2015, Lopez was part of Pope Francis’ Delegation during his visit in the Philippines where they went to Tacloban for spiritual support to the victims of Typhoon Yolanda.

Also, AKB Representative Christopher Co expressed his delight to Father Ted’s installation as a new Bicolano Parish Priest to serve the Catholic Community in Rome. He remembered a Latin adage, “when Parish Priests are outside Rome, they are considered as Bishops. Because inside Rome, the Pope himself serves as Bishop.”

In a statement, Fr. Lopez is thankful for the trust that was given to him by their Bishop, no another than Pope Francis himself. He said that this has a greater meaning, which is to guide a part of his flock.

Fr. Lopez is following the footsteps of his fellow Bicolano, the late Bishop Jose Barlin – the first Filipino Bishop in Catholic Church who was anointed as 28th Bishop of Nueva Caceres by Vatican on December 14, 1905. Barlin’s Episcopal consecration was held on June 29, 1906 in Manila.

THE INSPIRING JOURNEY OF FATHER BONIFACIO “TED” LOPEZ TO PRIESTHOOD

History on the Birth of the Quartiere and the Parrocchia SS. Elizabeth and Zacc.

The school camp took place in Vitorchiano (VT) and involved around 150 children aged 6 to 16.